Time to test: I’ve concluded my first attempt at collecting my menstrual blood. I finally got a Mooncup, it comes in a really nicely designed box with it’s own little pouch and the clear silicone aesthetic pleases my Scandinavian eye and doesn’t really feel hippie-ish at all, which I do appreciate. 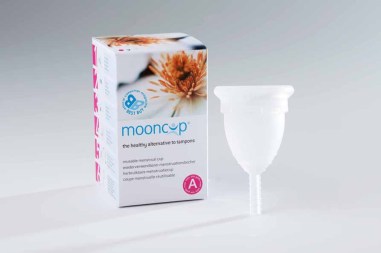 A Mooncup holds 30 ml, so not that much. It comes with neat instructions; “fold it once, fold it twice”. I found it relatively easy to insert, although its diameter is bigger than a tampon and isn’t inserted quite as smoothly as a tampon. Once in, it expands and gives off a little sound as it attaches itself to the vaginal walls. Think plunger.

I didn’t have much trouble emptying the cup. It’s definitely more messy than using tampons, especially when trying to make sure the blood doesn’t spill – tricky. More blood on fingers and kind of weird when reaching over to the sink to rinse it out if you do it in any other bathroom than your own; soiling someone’s sink with your period feels like overstepping a personal boundary. The cup feels heavy and warm when full – not unpleasant – and you have to sort of give it a toggle to release the vacuum, after which there’s a sifting sort of sound. It’s not elaborate and I quickly got the hang of it.

Two things were particularly fascinating to me. Firstly, the changing texture and quality of the blood during the period. I only filled the cup once, on my first day when the flow is at its heaviest. That blood was dark red, like blood anywhere in your body, from a cut or a wound. It was thick, but very smooth and actually really pretty.
Subsequently, the blood turned thicker and had more pieces of what I suspect is the uterine lining, lumpier and very dark. It then progressively got thicker, browner and more sparse, by the fourth day I wasn’t even filling the cup to an eight of it’s capacity. Although I obviously knew that the blood isn’t the same during the whole period, these changes aren’t something one really encounters when using pads and tampons – there might be more or less of it, but it’s kind of just blood. Here I became very aware of the actual processual quality embedded in the liquid itself.

By the end, it looked like this (let’s call it Stil life with menstrual blood, silver tea pot and phrenology head): 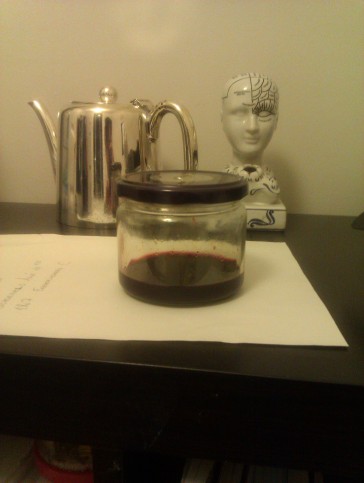 Secondly, it’s really super weird having a glass of your own menstrual blood stand next to you. Not so much ’cause it’s gross, although I’m sure most people would think it was, but because it felt distinctly like I had deposited a part of myself in that glass. So while I was sitting at the breakfast table I was simultaneously placed on a shelf in the next room. Yes, this sounds weird, but it really did take me a while to stop feeling like a bit of me had been deposited into a jam jar. I don’t mean that a little Miriam was trapped inside a glass screaming to get out. What I mean is that the ‘me’ ‘not me’ dialectics that is a core psychoanalytical argument when dealing with abjection didn’t feel very relevant – it was very much still me. Only after some time, when I had become accustom to the experiment and process of harvesting/collecting did the liquid cease being me.

I bore a constant grin on my face throughout those couple of days, by the way. Collecting my blood felt super cheeky, a bit forbidden and really liberating!

I should mention that the blood doesn’t dry out. Condensation formed on the side of the glass when it was placed in sunlight and the blood seems to separate slightly into layers, sort of like those bottles you’d make in school with oil and water in them. To keep it from going bad I’ve put it in the freezer, where it will reside until I figure out my next step. 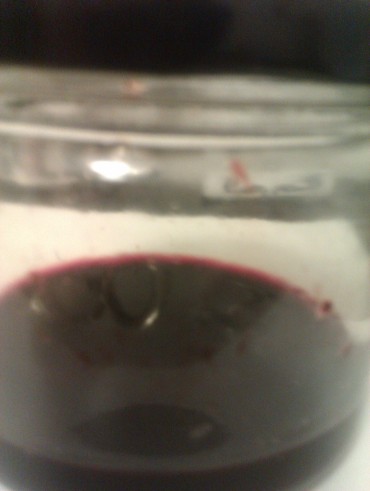 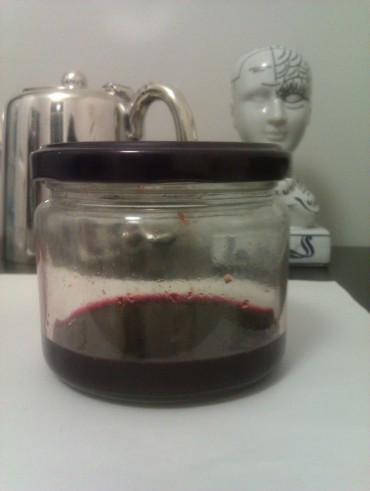